The Older Swan Guard was a member of the Swan Security Personnel in the DHARMA Initiative. 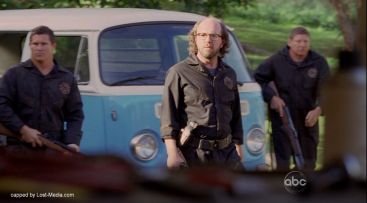 He accompanied Radzinsky and another Guard to the Motor Pool in a DHARMA Van, there they confronted Faraday, Jack & Kate. 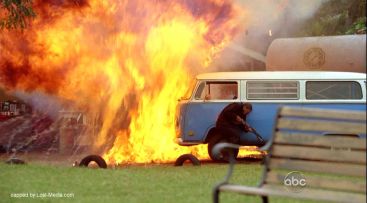 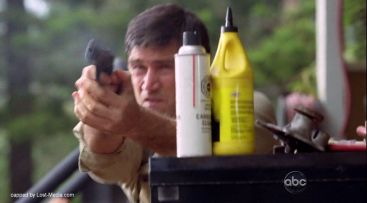 Radzinsky began questioning Daniel on why he was not at the Swan site, and once he saw that Faraday had a gun, he accused Daniel of lying about the intentions of the group, and a shoot out battle followed. Numerous shots were fired by both parties and when Jack opened fire on a fuel tank, resulting in a large, fiery explosion the Older Guard took cover behind the DHARMA Van. 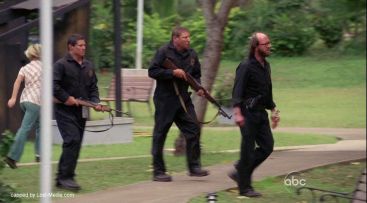 Immediately after sounding the alarm, the trio went to LaFleur’s house to ask him where he was during the firefight. As Sawyer was trying to calm Radzinsky down, a thud was heard from inside the house. Radzinsky discovered Phil, gagged and bound inside a closet. Radzinsky then forced Sawyer and Juliet to surrender while both guards held the two at gunpoint. (“The Variable”) 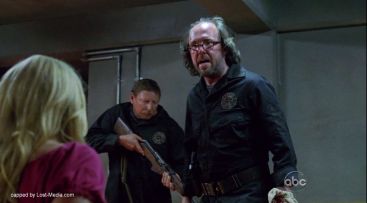 They brought Juliet and Sawyer to the Security Office and Radzinsky began to interrogate Sawyer over Kate’s location. The Older Guard watched over Sawyer, and helped him up after Radzinsky violently knocked him to the ground. (“Follow the Leader”)

Radzinsky called in Phil and his security team to the quarry to secure the perimeter. Phil ordered the Older Guard to top of the Swan construction site’s outer wall and opened fire on Jack when they spotted him. Suddenly, the DHARMA van reappeared, with Juliet and Kate firing on the DHARMA security team. Kate shot and killed the Older Guard who fell backwards outside the construction site. (“The Incident, Part 2”)

Keuthonymos (or Ceuthonymus) is the an ancient Greek spirit in mythology who is the father of Menoetes (or Menoites, Menoetius) who guarded the oxen of Hades.

Keuthonymos is a mysterious Daimon or spirit of the Underworld, who lives in the realm of Hades.