Olivia Goodspeed was a schoolteacher for the DHARMA Initiative on the Island in the mid-1970s.

Olivia was the passenger in Horace’s car, on a road 32 miles outside of Portland, when they saw Roger Linus carrying his dying wife Emily and their newborn baby out of the woods. They pulled over to offer their assistance when Emily suddenly died.

Olivia and Horace were involved with the DHARMA Initiative. Olivia worked on the Island as an elementary school teacher, and Ben and Annie were two of her students. One of the lessons she taught the class involved a scientific demonstration using a papier-mâché volcano. When Annie questioned if the eruption of the fake volcano was similar to what happened to the real one on the Island, Olivia responded affirmatively, but calmed Annie’s fear by stating it happened a “long time ago.” 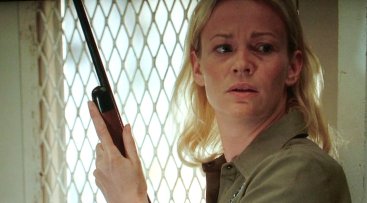 When the Hostiles attacked, Olivia reacted as though it were a common occurrence, and had a plan for how the students were to lock the doors and take cover. Olivia matter-of-factly picked up a bolt-action rifle, and showed proficiency in how she carried it. (“The Man Behind the Curtain”)

Artemis was one of the most widely venerated of the Ancient Greek deities. Some scholars believe that the name, and indeed the goddess herself, was originally pre-Greek. Homer refers to her as Artemis Agrotera, Potnia Theron “Artemis of the wildland, Mistress of Animals”. In the classical period of Greek mythology, Artemis (Greek: (nominative) Ἄρτεμις, (genitive) Ἀρτέμιδος) was often described as the daughter of Zeus and Leto, and the twin sister of Apollo. She was the Hellenic goddess of the hunt, wild animals, wilderness, childbirth, virginity and young girls, bringing and relieving disease in women; she often was depicted as a huntress carrying a bow and arrows. The deer and the cypress were sacred to her. In later Hellenistic times, she even assumed the ancient role of Eileithyia in aiding childbirth.

Various conflicting accounts are given in Classical Greek mythology of the birth of Artemis and her twin brother, Apollo. All accounts agree, however, that she was the daughter of Zeus and Leto and that she was the twin sister of Apollo.

An account by Callimachus has it that Hera forbade Leto to give birth on either terra firma (the mainland) or on an island. Hera was angry with Zeus, her husband, because he had impregnated Leto. But the island of Delos (or Ortygia in the Homeric Hymn to Artemis) disobeyed Hera, and Leto gave birth there.

In ancient Cretan history Leto was worshipped at Phaistos and in Cretan mythology Leto gave birth to Apollo and Artemis at the islands known today as the Paximadia.

A scholium of Servius on Aeneid iii. 72 accounts for the island’s archaic name Ortygia by asserting that Zeus transformed Leto into a quail (ortux) in order to prevent Hera from finding out his infidelity, and Kenneth McLeish suggested further that in quail form Leto would have given birth with as few birth-pains as a mother quail suffers when it lays an egg.

The myths also differ as to whether Artemis was born first, or Apollo. Most stories depict Artemis as born first, becoming her mother’s mid-wife upon the birth of her brother Apollo.

The childhood of Artemis is not fully related in any surviving myth. The Iliad reduced the figure of the dread goddess to that of a girl, who, having been thrashed by Hera, climbs weeping into the lap of Zeus. A poem of Callimachus to the goddess “who amuses herself on mountains with archery” imagines some charming vignettes: according to Callimachus, at three years old, Artemis, while sitting on the knee of her father, Zeus, asked him to grant her six wishes: to remain always a virgin; to have many names to set her apart from her brother Apollo; to be the Phaesporia or Light Bringer; to have a bow and arrow and a knee-length tunic so that she could hunt; to have sixty “daughters of Okeanos”, all nine years of age, to be her choir; and for twenty Amnisides Nymphs as handmaidens to watch her dogs and bow while she rested. She wished for no city dedicated to her, but to rule the mountains, and for the ability to help women in the pains of childbirth.

Artemis believed that she had been chosen by the Fates to be a midwife, particularly since she had assisted her mother in the delivery of her twin brother, Apollo. All of her companions remained virgins, and Artemis closely guarded her own chastity. Her symbols included the golden bow and arrow, the hunting dog, the stag, and the moon. Callimachus tells how Artemis spent her girlhood seeking out the things that she would need to be a huntress, how she obtained her bow and arrows from the isle of Lipara, where Hephaestus and the Cyclops worked. Okeanus’ daughters were filled with fear, but the young Artemis bravely approached and asked for bow and arrows. Callimachus then tells how Artemis visited Pan, the god of the forest, who gave her seven bitches and six dogs. She then captured six golden-horned deer to pull her chariot. Artemis practiced with her bow first by shooting at trees and then at wild beasts.

As a young virgin, Artemis had interested many gods and men, but none of them successfully won her heart, except her hunting companion Orion, who was then accidentally killed either by the goddess herself or by Gaia.

Alpheus, a river god, was in love with Artemis, but he realized that nothing he could do would win her heart. So he decided to capture her. Artemis who was with her companions at Letrenoi, went to Alpheus, but suspicious of his motives, she covered her face with mud so the river god would not recognize her. Another story involving the god is the story where he tried to rape Artemis’ attendant Arethusa. The goddess felt pity for her and saved her by transforming Arethusa into a spring in Artemis’ temple, Artemis Alphaea in Letrini, where the goddess and her attendant drink.

Bouphagos, the son of the Titan Iapetos, saw Artemis and had a thought of raping her. Detecting his sinful thoughts Artemis struck him at Mount Pholoe.

Sipriotes was a boy who, either because he accidentally saw Artemis bathing or attempted to rape her, was turned into a girl by the goddess.

Artemis was once bathing in a vale on Mount Cithaeron, when the Theban hunter Actaeon stumbled across her. Enraged, Artemis turned him into a stag and, not knowing their own owner, Actaeon’s own dogs killed him.

In some versions of the story of Adonis, who was a late addition to Greek mythology during the Hellenistic period, Artemis sent a wild boar to kill Adonis as punishment for his hubristic boast that he was a better hunter than she.

In yet another version, Adonis was not killed by Artemis, but by Ares, as punishment for being with Aphrodite.

Orion was a hunting companion of the goddess Artemis. In some versions of his story he was killed by Artemis, while in others he was killed by a scorpion sent by Gaia. In some versions, Orion tried to seduce Opis, one of her followers, and she killed him. In a version by Aratus, Orion took hold of Artemis’ robe and she killed him in self-defense. In yet another version, Apollo sent the scorpion. According to Hyginus Artemis once loved Orion (in spite of the late source, this version appears to be a rare remnant of her as the pre-Olympian goddess, who took consorts, as Eos did), but was tricked into killing him by her brother Apollo, who was “protective” of his sister’s maidenhood.

These twin sons of Iphidemia and Poseidon, Otos and Ephialtes, grew enormously at a young age. They were aggressive, great hunters, and could not be killed unless they killed each other. The growth of the Aloadae never stopped, and they boasted that as soon as they could reach heaven, they would kidnap Artemis and Hera and take them as wives. The gods were afraid of them, except for Artemis who captured a fine deer (or in another version of the story, she changed herself into a doe) and jumped out between them. The Aloadae threw their spears and so mistakenly killed each other.

Callisto was the daughter of Lycaon, King of Arcadia and also was one of Artemis’s hunting attendants. As a companion of Artemis, she took a vow of chastity. Zeus appeared to her disguised as Artemis, or in some stories Apollo, gained her confidence, then took advantage of her (or raped her, according to Ovid). As a result of this encounter she conceived a son, Arcas. Enraged, Hera or Artemis (some accounts say both) changed her into a bear. Arcas almost killed the bear, but Zeus stopped him just in time. Out of pity, Zeus placed Callisto the bear into the heavens, thus the origin of Callisto the Bear as a constellation. Some stories say that he placed both Arcas and Callisto into the heavens as bears, forming the Ursa Minor and Ursa Major constellations.

Artemis may have been represented as a supporter of Troy because her brother Apollo was the patron god of the city and she herself was widely worshipped in western Anatolia in historical times. In the Iliad she came to blows with Hera, when the divine allies of the Greeks and Trojans engaged each other in conflict. Hera struck Artemis on the ears with her own quiver, causing the arrows to fall out. As Artemis fled crying to Zeus, Leto gathered up the bow and arrows.

Artemis played quite a large part in this war. Like her mother and brother, who was widely worshiped at Troy, Artemis took the side of the Trojans. At the Greek’s journey to Troy, Artemis becalmed the sea and stopped the journey until an oracle came and said they could win the goddess’ heart by sacrificing Iphigenia, Agamemnon’s daughter. Agamemnon once promised the goddess he would sacrifice the dearest thing to him, which was Iphigenia, but broke the promise. Other sources said he boasted about his hunting ability and provoked the goddess’ anger. Artemis saved Iphigenia because of her bravery. In some versions of the myth, Artemis made Iphigenia her attendant or turned her into Hecate, goddess of night, witchcraft, and the underworld.

Aeneas was helped by Artemis, Leto, and Apollo. Apollo found him wounded by Diomedes and lifted him to heaven. There, the three of them secretly healed him in a great chamber.