Evelyn was Lara’s nurse during the later stages of her illness.

She greeted Miles with a look of mixed surprise and scorn when he arrived at his mother’s apartment (#7). She let him in to speak to his mother for the first time in a long while. (“Some Like It Hoth”) 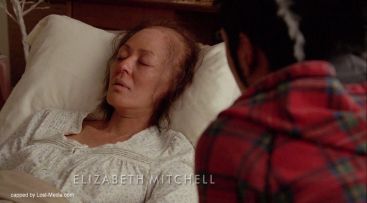 In Greek mythology, Maia is one of the seven Pleiades and the mother of Hermes.

Maia is the daughter of Atlas and Pleione the Oceanid, and is the eldest of the seven Pleiades. They were born on Mount Cyllene in Arcadia, and are sometimes called mountain nymphs, oreads; Simonides of Ceos sang of “mountain Maia” (Maia oureias) “of the lovely black eyes.” Because they were daughters of Atlas, they were also called the Atlantides.

According to the Homeric Hymn to Hermes, Zeus in the dead of night secretly begot Hermes upon Maia, who avoided the company of the gods, in a cave of Cyllene. After giving birth to the baby, Maia wrapped him in blankets and went to sleep. The rapidly-maturing infant Hermes crawled away to Thessaly, where by nightfall of his first day he stole some of Apollo‘s cattle and invented a lyre. Maia refused to believe Apollo when he claimed Hermes was the thief and Zeus then sided with Apollo. Finally, Apollo exchanged the cattle for the lyre.

Maia also raised the infant Arcas, the birth child of Callisto with Zeus. Wronged by the love affair, Zeus’s wife Hera in a jealous rage had transformed Callisto into a bear. Arcas is the eponym of Arcadia, where Maia was born. The story of Callisto and Arcas, like that of the Pleiades, is an aition for a star formation, the constellations Ursa Major and Ursa Minor, the Great and Little Bear.

The Pleiades, companions of Artemis, were the seven daughters of the titan Atlas and the sea-nymph Pleione born on Mount Cyllene. They are the sisters of Calypso, Hyas, the Hyades, and the Hesperides. The Pleiades were nymphs in the train of Artemis, and together with the seven Hyades were called the Atlantides, Dodonides, or Nysiades, nursemaids and teachers to the infant Bacchus.

There is some debate as to the origin of the name Pleiades. Previously, it was accepted the name is derived from the name of their mother, Pleione. However, the name Pleiades may derive from πλεῖν (to sail) because of their importance in delimiting the sailing season in the Mediterranean Sea.

Several of the most prominent male Olympian gods (including Zeus, Poseidon, and Ares) engaged in affairs with the seven heavenly sisters. These relationships resulted in the birth of their children. 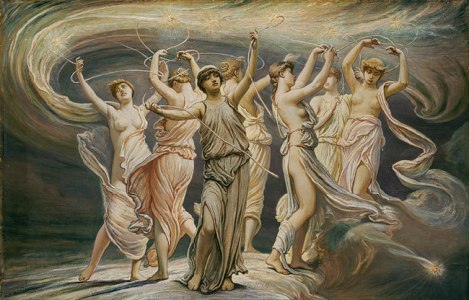 After Atlas was forced to carry the heavens on his shoulders, Orion began to pursue all of the Pleiades, and Zeus transformed them first into doves, and then into stars to comfort their father. The constellation of Orion is said to still pursue them across the night sky.

One of the most memorable myths involving the Pleiades is the story of how these sisters literally became stars, their catasterism. According to some versions of the tale, all seven sisters committed suicide because they were so saddened by either the fate of their father, Atlas, or the loss of their siblings, the Hyades. In turn Zeus, the ruler of the Greek gods, immortalized the sisters by placing them in the sky. There these seven stars formed the constellation known thereafter as the Pleiades.

The Greek poet Hesiod mentions the Pleiades several times in his Works and Days. As the Pleiades are primarily winter stars, they feature prominently in the ancient agricultural calendar. Here is a bit of advice from Hesiod:

“And if longing seizes you for sailing the stormy seas,when the Pleiades flee mighty Orion and plunge into the misty deep and all the gusty winds are raging, then do not keep your ship on the wine-dark sea but, as I bid you, remember to work the land.” (Works and Days 618-23)

The Pleiades would “flee mighty Orion and plunge into the misty deep” as they set in the West, which they would begin to do just before dawn during October–November, a good time of the year to lay up your ship after the fine summer weather and “remember to work the land”; in Mediterranean agriculture autumn is the time to plough and sow.

The poet Lord Tennyson mentions the Pleiades in his poem Locksley Hall:

“Many a night I saw the Pleiads, rising through the mellow shade, Glitter like a swarm of fire-flies tangled in a silver braid.”