Detective Raggs is a detective who worked out of the same police station as Captain Cortez and Ana Lucia. 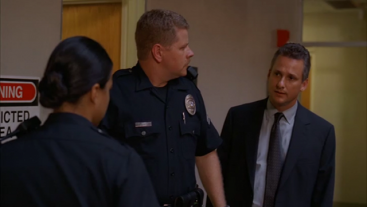 He welcomed Ana back to active duty after recovering from being shot by Jason McCormack.

Later, when Ana Lucia and Mike returned from the domestic dispute with Travis and Shawna, he informed her of the capture of the man who had shot her. (“Collision”)

CAPTAIN: Come on in.

In Greek mythology, Calchas (“bronze-man”), son of Thestor, was an Argive seer, with a gift for interpreting the flight of birds that he received off Apollo: “as an augur, Calchas had no rival in the camp”. He also interprets the entrails of the enemy during the tide of battle.

It was Calchas who prophesied that in order to gain a favourable wind to deploy the Greek ships mustered in Aulis on their way to Troy, Agamemnon would need to sacrifice his daughter, Iphigeneia, to appease Artemis, whom Agamemnon had offended; the episode was related at length in the lost Cypria, of the Epic Cycle. He also states that Troy will be sacked on the tenth year of the war.

In the Iliad, Calchas tells the Greeks that the captive Chryseis must be returned to her father Chryses in order to get Apollo to stop the plague he has sent as a punishment: this triggered the quarrel of Achilles and Agamemnon, the main theme of the Iliad.

Calchas also plays a role in Quintus of Smyrna’ Posthomerica. Calchas said that if they were brief, they could convince Achilles to fight. It is he rather than Helenus (as suggested in Sophocles’ “Philoctetes”) that predicts that Troy will only fall once the Argives are able to recruit Philoctetes. It is by his advice that they halt the battle, even though Neoptolemus is slaughtering the Trojans. He also tells the Argives that the city is more easily taken by strategy than by force. He endorses Odysseus’ suggestion that the Trojan Horse will effectively infiltrate the Trojans. He also foresees that Aeneas will survive the battle and found the city, and tells the Argives that they will not kill him. He did not join the Argives when they boarded the ships, as he foresaw the impending doom of the Kapherean Rocks.

Calchas died of shame at Colophon in Asia Minor shortly after the Trojan War (told in the Cyclic Nostoi and Melampodia): the prophet Mopsus beat him in a contest of soothsaying, although Strabo placed an oracle of Calchas on Monte Gargano in Magna Graecia. It is also said that Calchas died of laughter when the day that was to be his death day arrived and the prediction didn’t seem to materialize.

In medieval and later versions of the myth, Calchas is portrayed as a Trojan defector and the father of Chryseis, now called Cressida.