The Moderator led the discussion for Christian Shephard’s AA group.

She knew of Jack from what his father Christian had told the group about him, and as soon as he walked in she realized who he was.

She informed Jack his father had been sober for 50 days, but Jack still instigated a fight with Christian. (“A Tale of Two Cities”) 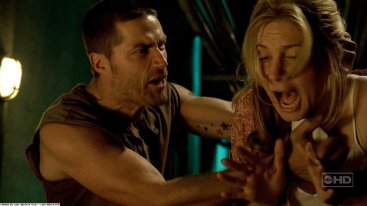 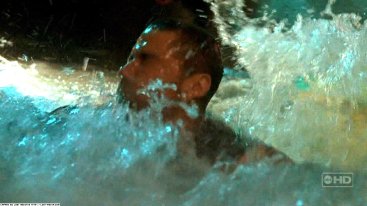 Chaos refers to the formless or void state preceding the creation of the universe or cosmos in the Greek creation myths, more specifically the initial “gap” created by the original separation of heaven and earth.

The same term has also been extended to parallel concepts in the religions of the Ancient Near East. The motif of chaoskampf (German for “struggle against chaos”) is ubiquitous in these myths, depicting a battle of a culture hero deity with a chaos monster, often in the shape of a serpent or dragon.

Hesiod and the Pre-Socratics use the Greek term in the context of cosmogony. Hesiod’s chaos has often been interpreted as a moving, formless mass from which the cosmos and the gods originated, but Eric Voegelin sees it instead as creatio ex nihilo, much as in the Book of Genesis. The term tohu wa-bohu of Genesis 1:2 has been shown to refer to a state of non-being prior to creation rather than to a state of matter. The Septuagint makes no use of χάος in the context of creation, instead using the term for גיא, “chasm, cleft”, in Micha 1:6 and Zacharia 14:4.

Nevertheless, the term chaos has been adopted in religious studies as referring to the primordial state before creation, strictly combining two separate notions of primordial waters or a primordial darkness from which a new order emerges and a primordial state as a merging of opposites, such as heaven and earth, which must be separated by a creator deity in an act of cosmogony. In both cases, chaos refers to a notion of a primordial state contains the cosmos in potentia but needs to be formed by a demiurge before the world can begin its existence.

This model of a primordial state of matter has been opposed by the Church Fathers from the 2nd century, who posited a creation ex nihilo by an omnipotent God.

In modern biblical studies, the term chaos is commonly used in the context of the Torah and their cognate narratives in Ancient Near Eastern mythology more generally. Parallels between the Hebrew Genesis and the Babylonian Enuma Elish were established by H. Gunkel in 1910. Besides Genesis, other books of the Old Testament, especially a number of Psalms, some passages in Isaiah and Jeremiah and the Book of Job are relevant.

Use of chaos in the derived sense of “complete disorder or confusion” first appears in Elizabethan Early Modern English, originally implying satirical exaggeration.

In Greek cosmology, Chaos was a primordial state of matter from which the cosmos and the other gods emerged. For Hesiod and the early Greek Olympian myth (8th century BC), Chaos was the “vast and dark” void from which Nyx emerged.

Chaos was also personified as a primal deity in Greek mythology, as the first of the Protogenoi and the god of the air.

Primal Chaos was sometimes said to be the true foundation of reality, particularly by philosophers such as Heraclitus. It was also probably what Aristotle had in mind when he developed the concept of Prima Materia in his attempt to combine Platonism with Presocraticism and Naturalism.

Ovid (1st century BC), in his Metamorphoses, described Chaos as “a rude and undeveloped mass, that nothing made except a ponderous weight; and all discordant elements confused, were there congested in a shapeless heap.”

Fifth-century Orphic cosmogony had a “Womb of Darkness” in which the Wind lay a Cosmic Egg whence Eros was hatched, who set the universe in motion.