The Eye of Horus is an ancient Egyptian symbol of protection, royal power and good health. The eye is personified in the goddess Wadjet (also written as Wedjat, Uadjet, Wedjoyet, Edjo or Uto and as The Eye of Ra or “Udjat”). The name Wadjet is derived from ‘wadj’ meaning ‘green’ hence ‘the green one’ and was known to the Greeks and Romans as ‘uraeus’ from the Egyptian ‘iaret’ meaning ‘risen one’ from the image of a cobra rising up in protection.

Wadjet was one of the earliest of Egyptian deities who later became associated with other goddesses such as Bast, Mut, and Hathor. She was the tutelary deity of Lower Egypt and the major Delta shrine the ‘per-nu’ was under her protection. Hathor is also depicted with this eye. Funerary amulets were often made in the shape of the Eye of Horus. The Wedjat or Eye of Horus is “the central element” of seven “gold, faience, carnelian and lapis lazuli” bracelets found on the mummy of Shoshenq II. The Wedjat “was intended to protect the king [here] in the afterlife” and to ward off evil. Ancient Egyptian and Near Eastern sailors would frequently paint the symbol on the bow of their vessel to ensure safe sea travel

Horus was the ancient Egyptian sky god who was usually depicted as a falcon. His right eye was associated with the sun Ra. The eye symbol represents the marking around a Peregrine Falcon’s eye that includes the “teardrop” marking sometimes found below the eye. The mirror image, or left eye, sometimes represented the moon and the god Djehuti (Thoth)

The eye as a hieroglyph and symbol

There are seven different hieroglyphs used to represent the eye, most commonly ‘ir.t’ in Egyptian, which also has the meaning ‘to make or do’ or ‘one who does.’ In Egyptian myth the eye was not the passive organ of sight but more an agent of action, protection or wrath.

In the Ancient Egyptian measurement system, the Eye Of Horus defined Old Kingdom number one (1) = 1/2 + 1/4 + 1/8 + 1/16 + 1/32 + 1/64, by throwing away 1/64 for any rational number. Eye of Horus numbers created six-term rounded-off numbers. The Old Kingdom definition had dropped a seventh term, a remainder 1/64, that was needed to report exact series. During the Middle Kingdom that included the eleventh through fourteenth dynasties, exact series definitions and applications were often written by 6-terms, or less. The Egyptian fraction notation scaled to volume unit remainders to 1/320 hekat. For example, the Egyptian Mathematical Leather Roll, the RMP 2/n table and the Akhmim Wooden Tablet wrote binary quotients and scaled remainders. The metaphorical side of this information linked Old Kingdom fractions 1/2, 1/4, 1/8, 1/16, 1/32, and 1/64, to separate parts of the eye.

In the Middle Kingdom the 1/64 symbol denoted ‘rest’ and ‘healing’ as connected to the hekat, with the word dja being attached.

The ‘Eye of Horus’ fractions were further discussed in the Egyptian Mathematical Leather Roll following elementary definitions that built the Egyptian fraction system. Weights and measure subunits of a hekat were also connected to Eye of Horus numbers in the quotient, and as an exact remainder, the remainder including an Egyptian fraction and a ro unit, correcting the Eye of Horus 1/64 roundoff error. The ro unit, 1/320 of a hekat, is cited in the Rhind Mathematical Papyrus and applied in the medical texts, i.e. Ebers Papyrus in two ways. The first replaced the hekat by a unity, 64/64 (in RMP 47, 82 and 83), and the second by 320 ro (in RMP 35–38). Exact divisions of 64/64 by 3, 7, 10, 11 and 13, written as 1/3, 1/17, 1/10, 1/11 and 1/13 multipliers, are also found in the Akhmim Wooden Tablet.

(The Eye Of Horus/Ra can be seen at the top of the tapestry, inside the Winged Sun Disk)

While exploring the DHARMA Initiative “The Arrow” Station, Libby found a box and inside this box she found a glass eye.


Eye of Providence (Eye of Horus/Ra)

The Eye of Providence (or the all-seeing eye of God) is a symbol showing an eye often surrounded by rays of light or a glory and usually enclosed by a triangle. It is sometimes interpreted as representing the eye of God watching over humankind (or divine providence).

Religious use of the Eye

Imagery of an all-seeing eye can be traced back to Egyptian mythology and the Eye of Horus. It also appears in Buddhism, where Buddha is also regularly referred to as the “Eye of the World” throughout Buddhist scriptures (e.g. Mahaparinibbana Sutta) and is represented as a trinity in the shape of a triangle known as the Tiratna, or Triple Gem.

In Medieval and Renaissance European iconography, the Eye (often with the addition of an enclosing triangle) was an explicit image of the Christian Trinity. Seventeenth-century depictions of the Eye of Providence sometimes show it surrounded by clouds or sun bursts.

In 1782, the Eye of Providence was adopted as part of the symbolism on the reverse side of the Great Seal of the United States. It was first suggested as an element of the Great Seal by the first of three design committees in 1776 and is thought to be the suggestion of the artistic consultant, Pierre Eugene du Simitiere.

On the seal, the Eye is surrounded by the words Annuit Cœptis, meaning “He approves (or has approved) [our] undertakings”, and Novus Ordo Seclorum, meaning “New Order of the Ages”. The Eye is positioned above an unfinished pyramid with thirteen steps, representing the original thirteen states and the future growth of the country. The lowest level of the pyramid shows the year 1776 in Roman numerals. The combined implication is that the Eye, or God, favors the prosperity of the United States.

Perhaps due to its use in the design of the Great Seal, the Eye has made its way into other American seals and logos, notably the Seal of Colorado and DARPA’s Information Awareness Office.

Today, the Eye of Providence is usually associated with Freemasonry. The Eye first appeared as part of the standard iconography of the Freemasons in 1797, with the publication of Thomas Smith Webb’s Freemasons Monitor. Here, it represents the all-seeing eye of God and is a reminder that a Mason’s thoughts and deeds are always observed by God (who is referred to in Masonry as the Great Architect of the Universe). Typically, the Masonic Eye of Providence has a semi-circular glory below the eye. Sometimes the Eye is enclosed by a triangle.

Popular among conspiracy theorists is the claim that the Eye of Providence shown atop an unfinished pyramid on the Great Seal of the United States indicates the influence of Freemasonry in the founding of the United States. This was dramatized in the 2004 Disney film National Treasure. However, common Masonic use of the Eye dates to 14 years after the creation of the Great Seal. Furthermore, among the members of the various design committees for the Great Seal, only Benjamin Franklin was a Mason (and his ideas for the seal were not adopted). Indeed, many Masonic organizations have explicitly denied any connection to the creation of the Seal. 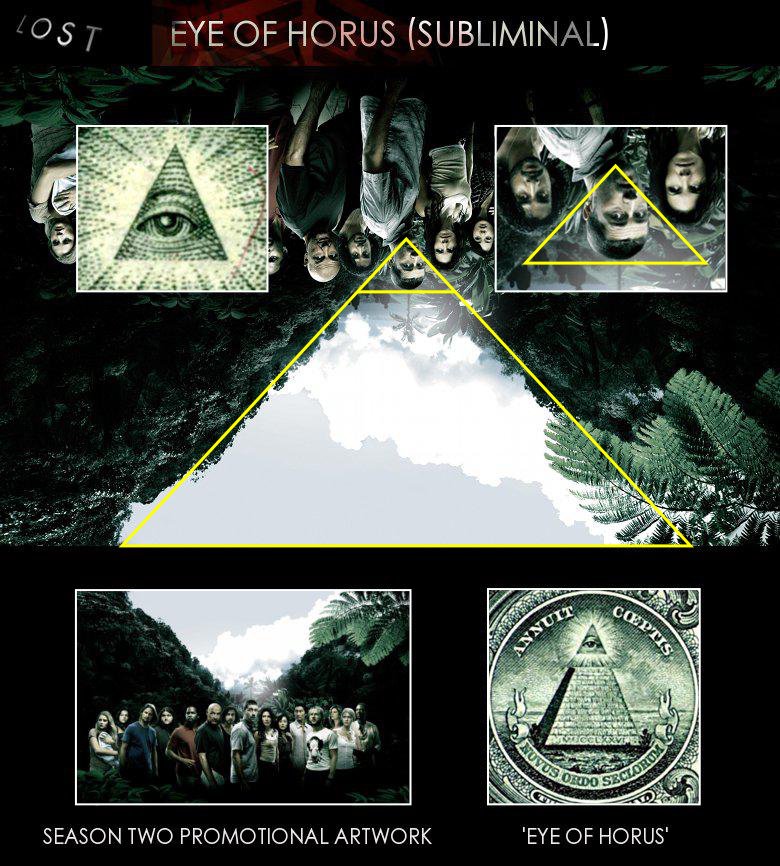 Oceanic Airlines was the fictional airline that operated Flight 815 which crashed on the Island.

According to Oceanic Airlines’ website, the company was founded in 1979 and served other destinations such as Costa Rica, London, and Seoul. After the events of Flight 815, it ceased operations due financial difficulties. However, in “Through the Looking Glass, Part 1”, we learned the airline was still running, and possibly, to remedy this contradiction, ABC Medianet announced in December 2007, in a press release, that the company was returning to the airways. It was established that Oceanic Airlines had cancelled all flights whilst conducting an investigation into Flight 815’s disappearance. After failing to find anything, the company was pushed to close the case so that they could resume flights and recover from loss of business.

After Oceanic 815 broke apart over the Island the tail section of the aircraft landed in the ocean.

After recovering the conned money for Cooper, Locke meets up with him near the Airport. An Oceanic Airlines aircraft lifted off just as Locke arrived. 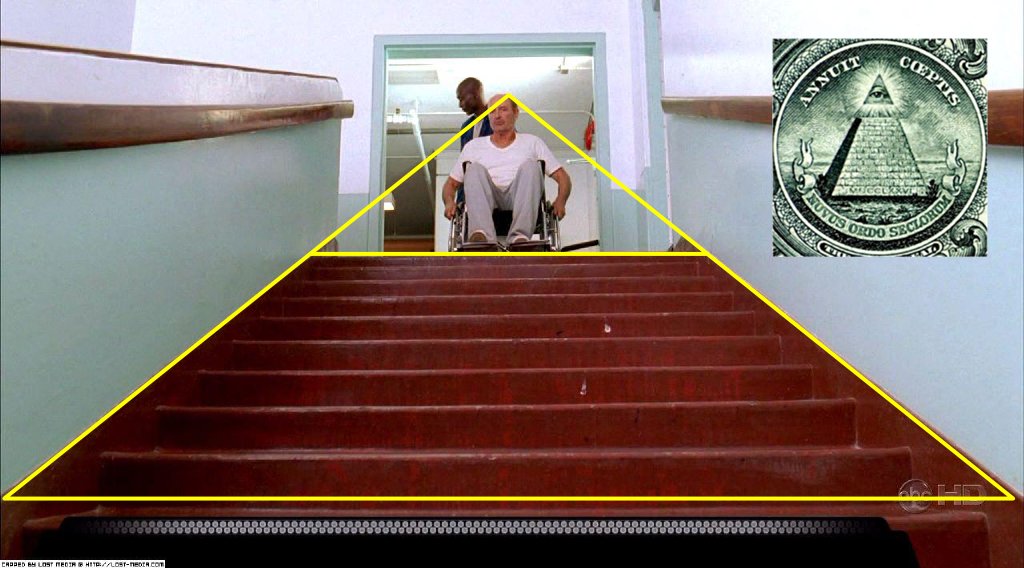 After the accident which caused Locke’s paralysis, Matthew Abaddon wheeled Locke during his rehabilitation period to the edge of a staircase.

The staircase can be seen to create a subliminal base of the pyramid and the landing where Locke is located creating the capstone. Locke is positioned so his eye is at the pinnacle of the capstone.

Jacob (RA) was waiting for Locke (OSIRIS) outside the high rise where he was pushed out the window. Jacob touched Locke and seemingly resurrected Locke from death.

When the survivors split into two factions on the Island, Hurley (HORUS) decided to side with Locke. (OSIRIS, his father)

All of the primary LOST characters converge at the end of the series in the Flash Sideways (Afterlife). Christian Shephard opens the doors of the church (Subliminal pyramid and Eye of Horus/Ra) to provide final illumination and allow them all to move on to the next stage of their evolutionary journey/level of existence.