Trevor was the landlord who rented to Lara Chang on March 16, 1985. 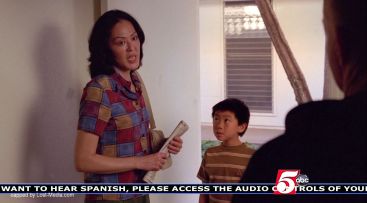 He was dubious about allowing the single mother of a young child to rent in his Southern California apartment building, as he had concerns about the child making noise and disturbing the neighbors, but he relented when the woman agreed to pay two months’ rent in advance.

When Miles came upon a dead body in one of his apartments, he followed Lara Chang in and saw the body. Miles mentions a Kimberly, and a bewildered Trevor replies that Kimberly was the man’s wife, who died a year earlier. (“Some Like It Hoth”)

In Greek mythology, Autolycus (“Lone Wolf”) was a son of Hermes and Chione. He was the husband of Neaera, or according to Homer, of Amphithea. Autolycus fathered Anticlea (who married Laertes of Ithaca and was the mother of Odysseus) and several sons of whom only Aesimus is named.

Autolycus was born the son of Hermes and Chione (Hyginus 201). He had a helmet to make him invisible. However Pausanias stated that his real father was Daedalion (Pausanias 8.4.7). Autolycus was conceived by Hermes touching the virgin Chione’s face (Ovid 11. 301).

Autolycus was husband to Mestra, daughter of Erysichthon (Ovid 8. 738), or to Neaera (Pausanias 8. 4. 3), or to Amphithea (Homer, Odyssey, 19. 394). He became the father of Anticleia and Polymede, of whom the latter was the mother of Jason, the famous Argonaut who led a group of men to find the coveted Golden Fleece (Apollodorus 1.9.16). A different Autolycus, the son of Deimachus, was a part of the Argonauts who went on the journey to find the fleece.

Through Anticleia, Autolycus was also the grandfather of the famous warrior Odysseus (Homer 24.330), and he was responsible for the naming of the child as well. This happened when the nurse of the child Eurycleia “laid the child upon his knees and spoke, and addressed him: Autolycus, find now thyself a name to give to thy child’s own child; be sure he has long been prayed for” (Homer 19.386-403).

Autolycus obtained most of the same skills that his supposed father Hermes possesses, such as the art of theft, trickery (Hyginus 201), and skill with the lyre and gracious song (Ovid 11. 301). It was said that he “loved to make white of black, and black of white, from a hornless animal to a horned one, or from horned one to a hornless” (Hyginus 201). He was given the gift that his thievery could not be caught by anyone (Hyginus 201).

He put his skills to the test when he stole the helmet of the great warrior and his grandson, Odysseus, “he had broken into the stout-built house of Amyntor, son of Ormenus; and he gave it to Amphidamas of Cythera to take to Scandeia, and Amphidamas gave it to Molus as a guest-gift, but he gave it to his own son Meriones to wear; and now, being set thereon, it covered the head of Odysseus” (Homer 10.254 I). Autolycus, master of thievery, was also well known for stealing Sisyphus‘ herd right from underneath him. Sisyphus, who was commonly known for being a crafty king that killed guests, seduced his niece and stole his brothers’ throne (Hyginus 50-99) and was banished to the throes of Tartarus by the gods.

Herakles, the great Greek hero, was taught the art of wrestling by Autolycus (Apollodorus 2.4.9). However, Autolycus was a source of some controversy in Herakles’ life, because Autolycus stole some cattle from Euboea and Eurytus, who accused Herakles of the deed and, upon his going mad about these accusations, Herakles killed them plus another one of Autolycus’ sons, Iphitus. This led to Herakles serving three years of punishment for the deed to repent for this (Apollodorus 2.6.3).