Kim Kondracki was an ER doctor at the Marina Medical Center Long Beach. 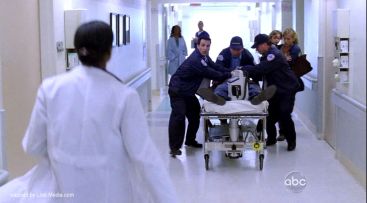 When Desmond was brought into the hospital after being shot by Ben, she was the ER Doctor on call. She told Penelope to wait, while Desmond was being treated. (“The Variable”)

In the flash sideways Kim Kondracki worked as a school nurse at Washington Tustin High School in California. It was rumored she was having an inappropriate affair of a sexual nature with Principal Reynolds on school grounds. Alex Rousseau told this to Dr. Linus during their tutoring lesson one morning at the school library. (“Dr. Linus”)

Nurse Kondracki later treated Ben after he was beat up by Desmond Hume. (“What They Died For”)

Eurynomê (“broad” + “pasture”) was the Titan goddess of water-meadows and pasturelands, and one of the elder Oceanides. She was the daughter of Oceanus and Tethys. Eurynome was the third bride of Zeus and mother of the Charites, goddesses of grace and beauty.

When Hephaestus was cast from Olympus by the goddess Hera, who was disgusted at having borne a crippled child, he was caught by Eurynome and Thetis (possibly a doubling for Tethys, her mother). Eurynome and Thetis nursed the god Hephaestus on the banks of the earth-encircling river Oceanus, after his fall from heaven. Charis, Eurynome’s daughter, later became Hephaestus’ bride.

Eurynome is closely identified with another Eurynome, Queen of the Titans. A second derivation of her name, “wide-ruling” can be taken from the Greek words eurys “wide” + nomos “law” or “ruling”. This Eurynome was an early Titan queen who ruled Olympus beside her husband Ophion. The pair were wrestled for their thrones by Cronus and Rhea who cast them down into the earth-encircling river Oceanus. She may have been the same as the Titan Tethys whose river-god sons nurtured the pastures and whose daughter Eurynome was goddess of pasturelands. Eurynome’s husband Ophion “the Serpent” was similar to Tethys’ husband Oceanus, who in classical art was represented with a serpentine-fish tail in place of legs and holding a snake (ophis). It is also possible that Ophion and Eurynome (daughter of Oceanus) were equated with Uranus (Heaven) and Gaia (Earth). In the Orphic Theogonies Gaia was the daughter of Hydrus (Water), a primordial being similar to Oceanus. It was Uranus who Cronus wrestles for the throne of Olympus in Hesiod’s Theogony.

Eurynome was worshipped at the confluence of the rivers Neda and Lymax in Arcadia. Her xoanon, which could only be viewed when her sanctuary was opened once a year, was a wooden statue bound in golden chains depicting a woman’s upper body and the lower body of a fish. Her son Asopus was the god of a nearby stream in the adjacent region of Sikyonia. The fish-tailed goddess, Eurynome, worshipped in Arcadia, may have been Eurynome wife of Ophion, Tethys the wife of Oceanus, Eurynome mother of the Charites, the goddess of the river Neda, or a watery Artemis.