Mary Ford was the mother of James “Sawyer” Ford.

She was killed by her husband, who then committed suicide, after they were both conned by Anthony Cooper, then known by the alias Tom Sawyer. She presumably engaged in adultery, thus prompting her husband’s rage. Mary warned Sawyer to hide under the bed, making it seem like he was at his grandparents’ house. (“Outlaws”)

Sawyer told Cooper his mother’s name was Mary and Cooper remembered her. He said, she practically begged him to take her $38,000 dollars and rescue her from her “sorry little life.” Cooper said he only took her money and wasn’t responsible for what James’ father did. (“The Brig”) 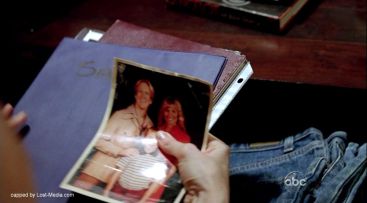 Silver-footed Thetis, disposer or “placer” (the one who places), is encountered in Greek mythology mostly as a sea nymph or known as the goddess of water, one of the fifty Nereids, daughters of the ancient one of the seas with shape-shifting abilities who survives in the historical vestiges of most later Greek myths as Proteus (whose name suggests the “first”, the “primordial” or the “firstborn”).

When described as a Nereid in Classical myths, Thetis was the daughter of Nereus and Doris (Hesiod, Theogony), and a granddaughter of Tethys with whom she sometimes shares characteristics. Often she seems to lead the Nereids as they attend to her tasks. Sometimes she also is identified with Metis.

It is likely, however, that she was one of the earliest of deities worshiped in Archaic Greece, the oral traditions and records of which are lost. Only one written record, a fragment, exists attesting to her worship and an early Alcman hymn exists that identifies Thetis as the creator of the universe. Worship of Thetis as the goddess is documented to have persisted in some regions by historical writers such as Pausanias.

In the Trojan War cycle of myth, the wedding of Thetis and the Greek hero Peleus is one of the precipitating events in the war, leading also to the birth of their child Achilles.

Most extant material about Thetis concerns her role as mother of Achilles, but there is some evidence that as the sea-goddess she played a more central role in the religious beliefs and practices of Archaic Greece. The pre-modern etymology of her name, from tithemi (τίθημι), “to set up, establish,” suggests a perception among Classical Greeks of an early political role. Walter Burkert considers her name a transformed doublet of Tethys.

In Iliad I, Achilles recalls to his mother her role in defending, and thus legitimizing, the reign of Zeus against an incipient rebellion by three Olympians, each of whom has pre-Olympian roots:

“You alone of all the gods saved Zeus the Darkener of the Skies from an inglorious fate, when some of the other Olympians—Hera, Poseidon, and Pallas Athene—had plotted to throw him into chains… You, goddess, went and saved him from that indignity. You quickly summoned to high Olympus the monster of the hundred arms whom the gods call Briareus, but mankind Aegaeon, a giant more powerful even than his father. He squatted by the Son of Cronus with such a show of force that the blessed gods slunk off in terror, leaving Zeus free” (E.V. Rieu translation).

Thus, evidence of major changes in religious concepts may be recorded only in fragments of myths that supersede and later, obscure the originals.

Quintus of Smyrna, recalling this passage, does write that Thetis once released Zeus from chains; but there is no other reference to this rebellion among the Olympians, and some readers, such as M. M. Willcock, have understood the episode as an ad hoc invention of Homer’s to support Achilles’ request that his mother intervene with Zeus. Laura Slatkin explores the apparent contradiction, in that the immediate presentation of Thetis in the Iliad is as a helpless minor goddess overcome by grief and lamenting to her Nereid sisters, and links the goddess’s present and past through her grief. She draws comparisons with Thetis’ role in another work of the epic Cycle concerning Troy, the lost Aethiopis, which presents a strikingly similar relationship—that of the divine Dawn, Eos, with her slain son Memnon; she supplements the parallels with images from the repertory of archaic vase-painters, where Eros and Thetis flank the symmetrically opposed heroes with a theme that may have been derived from traditional epic songs.

Thetis does not need to appeal to Zeus for immortality for her son, but snatches him away to the White Island Leuke in the Black Sea, an alternate Elysium where he has transcended death, and where an Achilles cult lingered into historic times.

Thetis and the other deities

Pseudo-Apollodorus’ Bibliotheke asserts that Thetis was courted by both Zeus and Poseidon, but she was married off to the mortal Peleus because of their fears about the prophecy by Themis (or Prometheus, or Calchas, according to others) that her son would become greater than his father. Thus, she is revealed as a figure of cosmic capacity, quite capable of unsettling the divine order (Slatkin 1986:12).

When Hephaestus was thrown from Olympus, whether cast out by Hera for his lameness or evicted by Zeus for taking Hera’s side, the Oceanid Eurynome and the Nereid Thetis caught him and cared for him on the volcanic isle of Lemnos, while he labored for them as a smith, “working there in the hollow of the cave, and the stream of Okeanos around us went on forever with its foam and its murmur” (Iliad 18.369).

Thetis is not successful in her role protecting and nurturing a hero (the theme of kourotrophos), but her role in succouring deities is emphatically repeated by Homer, in three Iliad episodes: as well as her rescue of Zeus (1.396ff) and Hephaestus (18.369), Diomedes recalls that when Dionysus was expelled by Lycurgus with the Olympians’ aid, he took refuge in the Erythraean Sea with Thetis in a bed of seaweed (6.123ff). These accounts associate Thetis with “a divine past—uninvolved with human events—with a level of divine invulnerability extraordinary by Olympian standards. Where within the framework of the Iliad the ultimate recourse is to Zeus for protection, here the poem seems to point to an alternative structure of cosmic relations” and the reference relates to the religious concepts that greatly ante-dated the classical period.

Marriage to Peleus and the Trojan War

An essential subordinate motif later occurring in the nature of Thetis, as a Nereid, one that links her with the dawn Titan Eos and with Aphrodite, is her liaison with a mortal lover which occurs with the rise of the Olympian deities. Reportedly most attracted to the goddess, but fearful of losing his hold on the deities, because Zeus had received a prophecy that Thetis’s son would become greater than his father, the familiar mytheme of the Succession Prophecy. Zeus had dethroned his father to lead the succeeding pantheon, therefore, in order to ensure a mortal father for her eventual offspring, Zeus and his brother Poseidon made arrangements for her marriage to a human, Peleus, son of Aeacus, but she refused him.

Proteus, an early sea-god, advised Peleus to find the sea nymph when she was asleep and bind her tightly to keep her from escaping by changing forms. She did shift shapes, becoming flame, water, a raging lioness, and a serpent. This ability was shared with many of the primordial deities of Archaic Greece (compare the early sea-god Proteus), but Peleus held fast. Subdued, she then consented to marry him. Thetis is the mother of Achilles by Peleus, who became king of the Myrmidons.

According to classical mythology, the wedding of Thetis and Peleus was celebrated on Mount Pelion, outside the cave of Chiron, and attended by the deities: there they celebrated the marriage with feasting. Apollo played the lyre and the Muses sang, Pindar claimed. At the wedding Chiron gave Peleus an ashen spear that had been polished by Athene and had a blade forged by Hephaestus. Poseidon gave him the immortal horses, Balius and Xanthus. Eris, the goddess of discord, had not been invited, however. In spite, she threw a golden apple into the midst of the goddesses that was to be awarded only “to the fairest.” In most interpretations, the award was made during the Judgement of Paris and eventually occasioned the Trojan War. By others such as Robert Graves, the imagery is considered misinterpreted and it is thought that it should reflect the selection of a king to be sacrificed in a sacred ritual).

In the later classical myths Thetis worked her magic on the baby Achilles by night, burning away his mortality in the hall fire and anointing the child with ambrosia during the day, Apollonius tells. When Peleus caught her searing the baby, he let out a cry.

“Thetis heard him, and catching up the child threw him screaming to the ground, and she like a breath of wind passed swiftly from the hall as a dream and leapt into the sea, exceeding angry, and thereafter returned never again.”

In a variant of the myth, Thetis tried to make Achilles invulnerable by dipping him in the waters of the Styx (the river of Hades). However, the heel by which she held him was not touched by the Styx’s waters, and failed to be protected. In the story of Achilles in the Trojan War in the Iliad, Homer does not mention this weakness of Achilles’ heel.

A similar myth of immortalizing a child in fire is connected to Demeter (compare the myth of Meleager). Some myths relate that because she had been interrupted by Peleus, Thetis had not made her son physically invulnerable. His heel, which she was about to burn away when her husband stopped her, had not been protected. Alternative interpretations assert that substitutes for the sacred king were sacrificed by fire (or water), putting off their ritual sacrifice for various numbers of years.

Peleus gave the boy to Chiron to raise. Prophecy said that the son of Thetis would have either a long but dull life, or a glorious but brief life. When the Trojan War broke out, Thetis was anxious and concealed Achilles, disguised as a girl, at the court of Lycomedes. When Odysseus found that one of the girls at court was not a girl, but Achilles, he dressed as a merchant and set up a table of vanity items and jewellery and called to the group.

Only Achilles picked up the golden sword that lay to one side, and Odysseus quickly revealed him to be male. Seeing that she could no longer prevent her son from realizing his destiny, Thetis then had Hephaestus make a shield and armor.

When Achilles was killed by Paris, Thetis came from the sea with the Nereids to mourn him, and she collected his ashes in a golden urn, raised a monument to his memory, and instituted commemorative festivals. According to alternative interpretations suggesting archaic traditions, Paris would have been the succeeding sacred king who was selected next by the three goddesses.