The arrival of the freighter spelled disaster for both the survivors and the Others. Unbeknownst to Jack and those who had sought to contact the boat, the people on board worked for Charles Widmore, who was said by Ben to be a “bad man” who would destroy the Island and everyone on it. It emerged that the people on the freighter planned to kill everyone on the Island after extracting Ben, and the result was the death of all the freighter’s soldiers at the hands of Richard Alpert and the Others. Ben was shown to also have some degree of control over the Monster, summoning it after Alex was murdered.

Much of Ben’s actions were done in the name of the Island, and indeed he and Locke followed orders by Jacob, who seems connected to the Island itself. In doing this, Ben went to the Orchid station and turned a frozen wheel, which resulted in the Island physically disappearing. This event also ended Ben’s leadership, as he stated whoever moved the Island could not return to it. As a consequence, John Locke appeared to have emerged as the new leader of the Others. 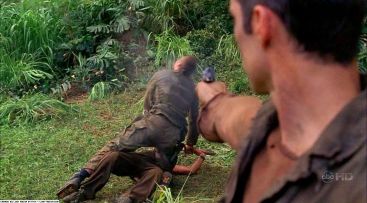 Interestingly enough, when the Others returned from the Temple to eliminate the mercenaries and greet their new leader, they were once again wearing shabby clothes and camping in crude tents, suggesting that there is more to this way of life than a mere deception.

The Others – Decoded Characters