Colleen Pickett was an Other who appeared to have some level of authority. She was married to Danny Pickett. While attempting to take the castaways’ sailboat, she was shot by Sun and died shortly afterward. 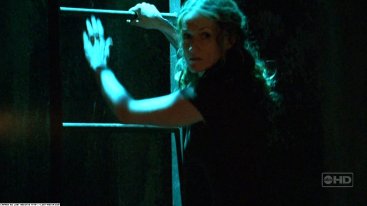 Colleen first appeared in the underwater section of the Hydra station, when she reported to Ben and Juliet that some of the castaways had a sailboat. 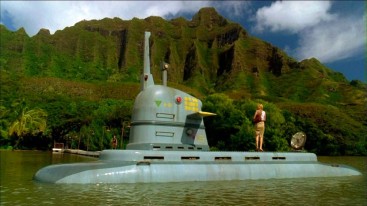 Ordered to round up a team and take the boat, she left the aquarium to find some of the Others that could help her. Before recruiting Tom to her mission, she spoke to her husband Danny and told him about her mission, saying she was ordered to take the “Galaga.” The two kissed, and Colleen left.

At night, Colleen and a group of Others managed to capture the sailboat, somehow unnoticed by Sayid and Jin, who were watching the boat from the Pala Ferry dock. Investigating below deck, Colleen was confronted by Sun, who held her at gunpoint. Colleen notably referred to Sun by her full Korean name and told her that she could not let her go, as it “wasn’t her call”.

She also said that they “weren’t the enemy,” but that if Sun shot her they would become exactly that, and she knew that Sun “wasn’t a killer.” However, as the boat suddenly jerked due to the engine having been turned on, Sun panicked and shot an unarmed Colleen in the stomach. Shots were afterward returned by Tom and Ivan as Sun jumped off the boat, leaving a shocked and mortally wounded Colleen in the cabin. (“The Glass Ballerina”)

When Colleen’s team returned to the Hydra Island, Colleen was rushed, still alive, but in critical condition, to Juliet, Ben, and Danny. After she was brought to the Hydra operation room, Juliet did what she could to save her, but realized that while she was able to remove the bullet, she was unable to do more. Helpless, Juliet retrieved Jack, seeking his assistance. Jack arrived at the operating room and attempted to save Colleen’s life. She flatlined on the table, and Jack was unable to revive her because the crash-cart was broken. Jack attempted to manually restart her heart, but failed. After her body was taken away, Jack stated that Colleen was dead before she was even brought to the room. (“Every Man for Himself”) 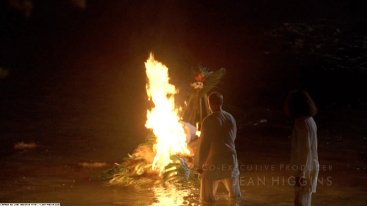 The next day, Ben summoned Jack to attend Colleen’s funeral, during which all of the mourners wore loose white clothes. Brenda Lee’s “I Wonder” played on a speaker system while Colleen’s body was released to the ocean on a funeral pyre, and was set on fire. (“The Cost of Living”) 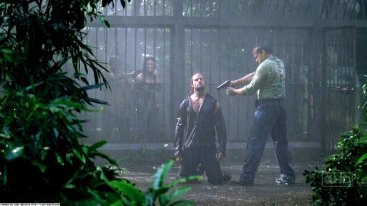 The heart-broken Danny took out his anger on Sawyer, holding him responsible. Right before attempting to kill Sawyer two days after the funeral, he said that his action was dedicated to his beloved dead wife. (“I Do”)

(Hat-Mehyt) Hatmehyt was the principal Goddess of the city of Djedet, a city in the Delta known to the Greeks as Mendes, and lends her name also to the nome, or district, in which it was located (the sixteenth nome of Lower Egypt). Her name means ‘Foremost among fish’, and she is depicted as a woman with a fish emblem over her head or sometimes as a fish. The specific fish with which Hatmehyt is identified may be the Nile carp, the tilapia, or even the dolphin (argued particularly by Meeks 1973), and perhaps there is no need for these identifications to be exclusive. The significance of the dolphin, which was known to venture occasionally some distance up the Nile, would lie in its position as the premier hunter of fish. Hence the Greeks referred to the dolphin as “king of the fish and ruler of the sea” (Meeks 215 and n. 10). An Egyptian calendar refers to the 28th day of the fourth month of the season of Akhet as a day on which “not to eat the eaters-of-fish in Mendes.” Pliny the Elder speaks of dolphins in the Nile as killing crocodiles with their sharp dorsal fins (Natural History 8, 91), and Seneca (Quaest. Nat. 4, 2, 13) speaks of dolphins and crocodiles fighting in the Canopic mouth of the Nile. Such reports may reflect Egyptian ideas about the dolphin. Hatmehyt is sometimes depicted in the solar boat, where her role may have been to dominate the ‘fish’ dwelling in the celestial ‘sea’. A wide-ranging symbolic value is attached to fish and fishermen in Egyptian thought, as can be seen by symbolic images of fishing in tombs and references in the afterlife literature to fishermen and fish-nets which threaten the deceased, implying an identification between fish and mortal souls as such and a concern that one be fisher rather than fish. In this regard it is worth noting that the word mehyt, ‘fish’, can also mean ‘drowned’, and is a term used of Osiris when he is cast into the Nile. The Nile carp, for its part, is otherwise important in Egyptian religion as the fish who consumed the detached phallus of Osiris, requiring Isis to craft a magical substitute phallus for the reconstituted Osiris in order to conceive Horus. There may be a reference to this myth in the Lamentations of Isis and Nephthys, where Nephthys addresses Osiris, asking him to “come to Djedet, O lusty bull … O lover of women, come to Hatmehyt,” (Lichtheim vol. 3, 119). Hatmehyt here is the district, not the Goddess, but the sexual terms in which the appeal is posed allude to the myth, in which Hatmehyt’s role seems to be to receive the phallus of Osiris on a ‘physical’ plane while Isis receives it on a ‘metaphysical’ one. Hatmehyt’s consort is Banebdjedet.

Hatmehyt was a fish-goddess worshipped in the Delta, particularly in the northeast at Mendes.

The fish as a divinity is comparatively rare in the Egyptian pantheon, but Hatmehyt’s name means “she who is in front of the fishes” referring to her pre-eminence in relation to the few rival fish cults. However, it could also be interpreted in a temporal sense to stress the goddess as the “beginning” i.e. earliest fish-goddess to exist when Egypt emerged from the primeval waters.

She can be represented completely as a fish, the shape of which led to former suggestions that it was a dolphin. This has now been discarded in favor of an identification with the lepidotus fish, common in the Nile.

At Mendes, in a district for which the ancient standard was the fish symbol indicating that Hatmehyt was the senior deity in terms of residence there, her cult becomes subordinated to that of the ram-god Banebdjedet – interpreted after his arrival as her consort.

In Egyptian mythology, Hatmehit, or Hatmehyt (reconstructed to have been pronounced *Hāwit-Maḥūyat in Egyptian) was a fish-goddess, originally a deification of the Nile River, by the people in the area around the delta city of Per-banebdjedet, Mendes.

Her name translates as House of Mehit, (Hat Mehit), implying she may have some connection to Hathor, one of the oldest deities of Egypt who also went by the name Mehit, meaning great flood. This may possibly be due to being seen as a remnant of the primal waters of creation from which all things arose. Other goddesses associated with the primal waters of creation are Mut and Naunet.

In Ancient Egyptian art Hatmehit was depicted either as a fish, or a woman with a fish emblem or crown on her head, and was known as the Foremost of Fish or Chief of Fish. She was a goddess of life and protection.

When the cult of Osiris arose, the people of Mendes reacted by identifying Osiris as having achieved his authority by being the husband of Hatmehit. In particular, it was the Ba of Osiris, known as Banebjed (literally meaning Ba of the lord of the djed, referring to Osiris), which was said to have married Hatmehit.

When Horus became considered the son of Osiris, a form known as Harpocrates (Har-pa-khered in Egyptian), Hatmehit was consequently said to be his mother. As wife of Osiris, and mother of Horus, she eventually became identified as a form of Isis.