Sun-Hwa Kwon (née Paik) (Korean name: Paik Sun-hwa; Hangul: 백선화; Hanja: 白善華), more commonly known as Sun, was married to Jin-Soo Kwon and was one of the middle section survivors of Oceanic Flight 815. Before the crash, Sun and Jin’s marriage suffered because Jin oppressed her and they couldn’t conceive. She strayed from and almost left her husband at one point. On the Island, the couple isolated themselves until Sun revealed she spoke English, shocking her husband. He shunned her, but they later reconciled. Despite Jin’s infertility, Sun conceived Jin’s baby on the Island, which strengthened their marriage but threatened Sun’s health. The couple managed to board an offshore freighter, but only Sun seemed to escape its explosion.

Back in civilization, Sun assumed control of her father’s company and sought revenge for Jin’s death. She flew back to the Island upon learning Jin was still alive. Their reunion was brief. She and Jin drowned together when a submarine they boarded sank.

In the flash-sideways, Sun and Jin were reunited with their daughter Ji Yeon and their friends from the Island, and they all moved on together.

After Jack called the freighter, Sun celebrated, delighted she’d have her baby in a hospital. She journeyed with the rest of the survivors to the cockpit where she reunited with Jin, and when the camp divided, she stayed with Jack’s group. (“The Beginning of the End”)

A day or so later at the beach, Sun and Jin discussed their post-island plans – though Jin wanted to live in New York, Sun preferred Seoul. She became suspicious about the freighter’s intentions, and discussed this with Jack. (“Eggtown”)

When she noticed Daniel and Charlotte missing, she searched for them with Jin and Vincent. (“The Other Woman”) 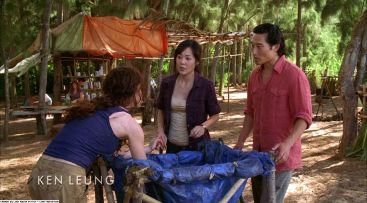 When she learned what they’d done in the Tempest, she packed supplies and took a map from Kate to move to Locke’s camp. Juliet caught her packing vitamins, and, unable to dissuade her from leaving the camp, she revealed Sun’s affair to Jin.

Sun and Jin had been happily discussing baby names the night previously, but this news temporarily divided them. Sun confronted Juliet, expressing anger and mistrust. Jin forgave Sun that night, especially after she confirmed the baby was his. (“Ji Yeon”) 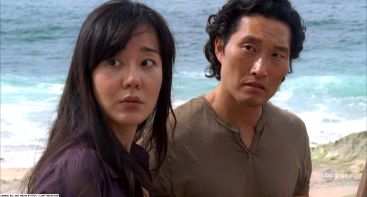 A day later, Sun responded to Bernard’s calls for help when a dead body washed ashore. (“The Shape of Things to Come”) 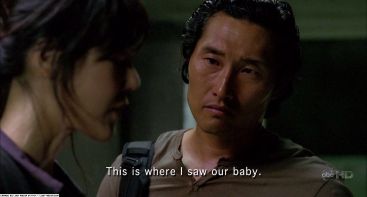 When Jack’s appendicitis mandated surgery, Sun led an expedition to retrieve equipment from the Staff, where she discussed Daniel and Charlotte with Jin and showed him the ultrasound on which she’d seen their baby. (“Something Nice Back Home”)

Sun and Jin boarded the first ferry to the the freighter, where Michael’s presence surprised them. She told him of her pregnancy. They discovered C-4 explosives, and she went above deck, where Michael assured her they could freeze the bomb. (“There’s No Place Like Home, Part 1”)

Sun boarded the chopper when it arrived, but Jin did not, and the freighter exploded as Sun screamed hysterically. The chopper crashed, and Sun scrambled into the life-raft till the Searcher picked them up. (“There’s No Place Like Home, Parts 2 & 3”) 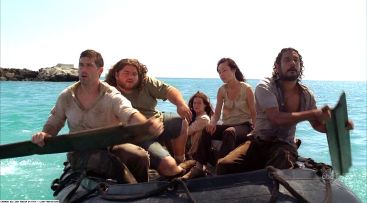 During the week aboard, Sun accepted their decision to lie about their time after the crash. She then departed with the rest of the Oceanic Six on the life-raft for the island of Sumba. (“There’s No Place Like Home, Parts 3”) (“The Lie”)

The coast guard flew the Oceanic 6 to Honolulu press conference, where Sun said in English that Jin had died during the crash. Her mother and father greeted her emotionally when she stepped off the plane, but Sun secretly felt bitter. Within a few months, she used her settlement from Oceanic Airlines to buy a controlling stake in her father’s company. When she informed him of this, she also confronted him about how he’d treated Jin, blaming him for his death. (“There’s No Place Like Home, Part 1”)

Sun remained close to Hurley, who visited her in Korea after she gave birth to her daughter Ji Yeon. The delivery was difficult, and she deliriously called for Jin while in the hospital. She and Hurley visited Jin’s grave with the new baby. (“Ji Yeon”)